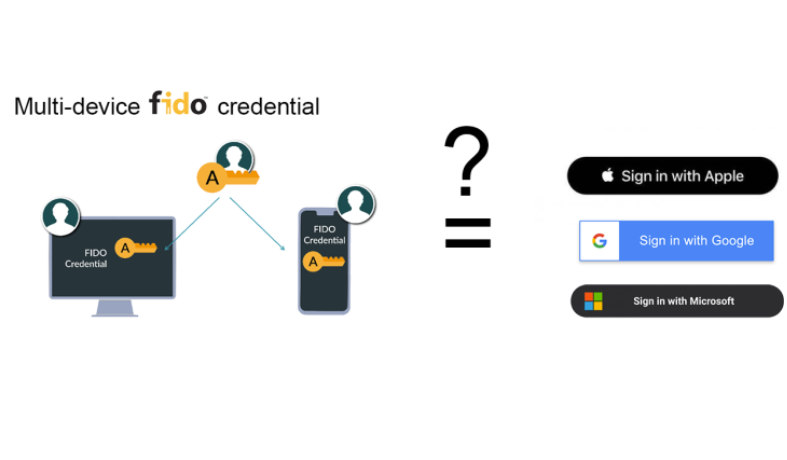 Did FIDO just mess things up?

FIDO has already been around for quite a while and is probably best known for hardware tokens like Yubikey. There has been limited adoption, primarily in enterprise contexts where it can be mandated or by security-sensitive individuals. FIDO has already, from the start, been looking into performing authentication directly on-device or using the mobile phone as an authenticator device. Despite these specifications being around for a while, this FIDO flavour has barely been adopted.

FIDO announced multi-device FIDO credentials, or Passkeys as Apple, Google, and Microsoft call them. These allow you to share FIDO credentials across multiple devices and recover them, e.g., after phone loss. Although this looks very nice from a user perspective, it comes with a nasty catch. The promise that keys will be synced or recovered through the cloud essentially means that one of FIDO’s initial claims to fame – secure key storage – is no longer valid. FIDO relies (relied on?) on dedicated hardware tokens or an on-device TPM (trusted platform module – secure hardware) to guarantee that the private key cannot be extracted and never leaves the device.

FIDO used to have a strong coupling between the secure hardware and the on-device biometrics: only after inputting a correct biometric sample the secure hardware could use the FIDO credentials once to sign a challenge. But with the FIDO credentials no longer residing in secure hardware (as this does not allow for extracting keys), this strong coupling with the on-device biometrics is gone as well. Furthermore, it is not because two devices are linked with the same Apple/Google/Microsoft account that these contain the same set of biometrics, e.g., your personal phone and a tablet at home, which is shared with your family.

All the above will also reinforce the grip of Apple, Google, and Microsoft on their users’ accounts. They will happily accept your keys. To what extent you’ll be able to control it and what protection against prying government eyes there will be, remains to be seen. It is also improbable that Apple/Google/Microsoft will allow third-party FIDO authenticators on their devices. How cross-platform sync will take place also remains to be seen, as all three players tend to consider their own accounts as the-one-and-only. Will your Chrome browser on your Microsoft device live in the Google universe, while your iPhone will have all the Apple-linked credentials?

We do things differently

At nextAuth, we do not believe in putting all your credentials in the hands of big tech. For high security, credentials should be linked to a device and locked to the current set of biometrics (i.e. invalidated when a new biometric sample is added). nextAuth allows you to do all that, and moreover couple multiple devices to the same user. Each device comes with its own credentials that are securely stored in hardware and coupled with the on-device biometrics.

That’s only one of the ways nextAuth sets itself apart from FIDO. Click on the button below to discover more ways we surpass FIDO’s capabilities.